Jasper surveys his surroundings with his new human. 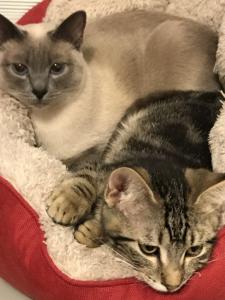 Penny and Jasper learn the finer points of sharing. 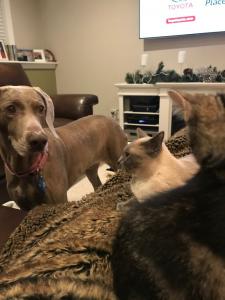 The whole family of pets! Gracie (dog), Penny (Siamese), and Jasper looking on with interest.

We are at the 10-day mark. So here’s an update. When I got Jasper home he saw Penny (1-year-old Bluepoint Siamese female kitten) first and they just looked at each other and didn’t react at all.  Then Jasper saw Gracie (my 77 pound Weimaraner) and he instantly started hissing at her. Well, Penny got it in her head he was hissing at her so she hisses and growled to dominate him.

So I put a muzzle on Gracie and we began the introduction process over the next few days. Jasper didn’t know that Penny was being mean to him and he thought she was playing so they would chase each other and he was having a great time. She would bat at him and she doesn’t have her from claws so it was all play to him. I think the moment Penny started playing with him was the night they were chasing each other. Jasper sprinted right up to Penny, with the sideways approach at the end and popped up real big. Then he ran away and more equal play ensued.

Now they are the best of friends and always off playing together. I put multiple litter boxes around the house and emptied one they weren’t using. Somehow they turned it over and started playing a game of hide and seek.

They are constantly cracking me up.  I’ve learned Jasper isn’t a fan of salmon wet food and that he would rather eat Penny’s food than the royal canin kitten food so I switched him over to the kitten version of Penny’s food and he gobbles it right up.

Jasper will also come and cuddle and sleep under the covers right by my face. He’s such a sweetie.

Jasper is still a tad scared of Gracie when she tries to play with him but I’m sure that will come along. Otherwise, he’ll walk by her no problem.

He’s already met his vet Dr. Gus and they are in love with him too.

All in all we couldn’t be happier! Thank you so much for doing what you do!