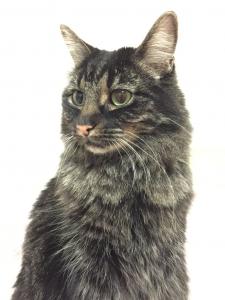 Deleuze practicing one of her model poses

I cannot begin to tell you how much I love my first companion, Deleuze (f/k/a Anna, est, DOB 07/14/2011). Deleuze is the sweetest and kindest cat I could have ever asked for. I don’t remember the name of the volunteer who was at Petsmart East, but she was instrumental in helping me see Deleuze and I would be forever companions. She said Deleuze was perfect for me, because when she put Deleuze in my arms, she said Deleuze had not stayed still like that in any strangers’ arms before.

Early on, she was a scared, nervous cat, but she has become calmer and more affectionate. As we’ve lived and grown together for the years following, I feel like both of us have blossomed into a happier and healthier version of ourselves, because we have each other. Attached is one of the many pictures I take of her (she’s quite a model cat!).
Every year, I try to donate to Angel’s Wish because I’m grateful you have brought Deleuze and me together!
Thank you so much!
Adopted 2/10/2012