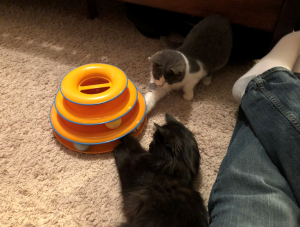 Daisy (grey & white) and Luna (black) will get those balls out one day! 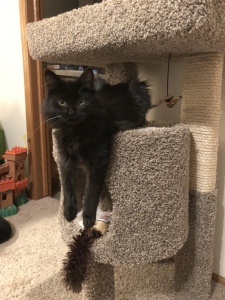 Luna is now in charge of the cat tree. Do you have an appointment? 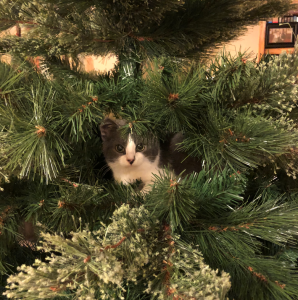 Hi, I wanted to let everyone know that Minerva and Binty (now Luna and Daisy respectively) are doing great at home.  They spent the first several days hanging out in cat central (the master bedroom) but have now been given mostly free-reign in the house except when everyone is gone.  By the end of the week, we’ll probably leave all the doors open to them, even when they’re alone.

Luna has been feisty and bold since the beginning, but predictably Daisy was a little more stand-offish, only allowing pets when she was super tired and relaxed.  In the last week, she’s become much braver and cuddlier, even if still a little jumpy.  Luna seems to make an effort to make her comfortable, though, and the two play together very well.  They’re quite a pair.

They had their first check-up at Cat Care Clinic last Wednesday.  I was a little concerned that Luna may have still had a parasite as she had puked up a bit of bile and had loose stool the first few days she was at the house.  They both tested negative for parasites, though, and I was given some medication and probiotics to help with any upset stomach issues.  There has been a lot of improvement since.

Also, we mentioned when we were there to pick up these kitties that our daughter was asking people to bring donations for Angels Wish to her birthday party yesterday.  We had 25 kids show up for the party, so we have a large amount of donated gifts to drop off for you this Saturday!  Tons of cat toys, food, litter, and cleaning supplies.