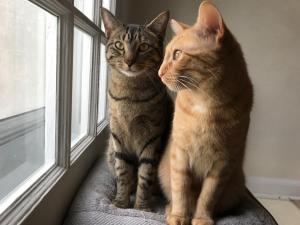 Monty (brown tabby) and Colby (orange tabby) patrol the outside to make sure everyone is safe. 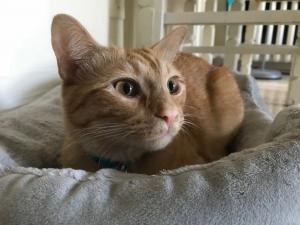 Colby doesn’t like be startled when he’s doing a snooze in his cat bed. 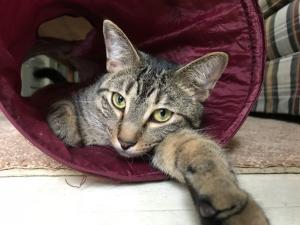 Monty invites you to explore this crinkly tunnel with him…and perhaps take a quick nap.

I adopted two cats from Angel’s Wish when I moved to WI, a little over a year and a half ago. A feisty orange dude I named Colby Jack and a chill brown tabby I named Monterey Jack. I just wanted to give you a quick update on them. They are absolutely amazing cats, and both are approaching their 2nd birthdays in mid-April. Colby has psycho amounts of energy and will chase his favorite toys until he’s panting. He’s not so clever and is a crazy picky eater, but his snuggles and purrs make up for it. Monty is much more laid back and likes to survey his kingdom from the top of his cat tree, but is super food motivated and will do anything for a snack. Makes it really easy to train him in some basic tricks! I also think they’re both some of the most photogenic cats you’ll ever see, but I might be biased. I can’t thank you enough for helping bring them into my life.
Thank you,
Emily