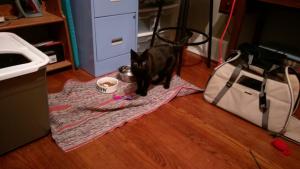 Jet would like you show you around his room. To his right, you’ll see his food bowl–please do not touch unless you are filling it. 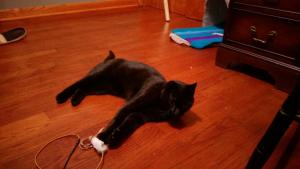 Jet playing with his toy 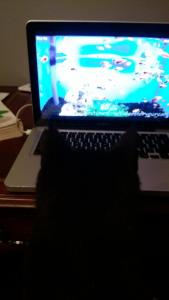 Varun and I recently adopted Jet through you about a week ago.

If you recall, we have another cat, Rocannon. Rocannon is less than happy to be sharing his house with a new cat. We’ve been keeping them separate (Jet has his own room) and they can interact under the door and sometimes (usually at night…) do talk to each other through it. Jet has gotten stronger having more space to move, so while he cowered from Rocannon at first, he’s now bold enough to roam around the room and he’s now started playing in the same room when Rocannon is there. Rocannon will play too, but he keeps an eye on Jet and goes after him like a toy he’s stalking the moment Jet turns his back and gets possessive. He doesn’t hiss or pin his ears, he just tried to grab him with his teeth and claws like a toy or asserting dominance. Jet is now comfortable enough to hiss and swat at him, which makes Rocannon back off, but Jet can’t let his guard down yet. We’ve been keeping their time together short so they end on good notes and have good interactions with each other. Jet is such a sweet cat and doesn’t show any interest in Rocannon, neither happy for company or hateful. It’ll be a very slow process, but I hope that they will get to a point where they are happy with each other’s company. So far Jet’s very comfortable in the room, but it’ll take a while for him to settle in the house.

He’s using the litter box and eating his mix of old and new food like a champ. He was starting to look a lot better when I adopted him, and now he looks pretty great. His coat has gotten glossier, his scabs are gone, his eyes and ears are clearing. He LOVES people, even strangers. When someone walks in it usually takes him a minute to come out and settle down, but then he’s all purrs and loving the pets and belly scratches. He’s starting to play a lot, his favorite toy being a mouse on a leather string, attached to a stick. I play with that daily trying to get his muscles back in shape and it seems to be helping a lot. He used to have a little difficulty jumping up and now he does quite well. His room has his bed that he usually is sleeping on, but it also has a window to look out of with a perch and that’s where he is for most of the day I think, since that’s where he always climbs down from when I go in. He seems very happy, and we can’t wait until everything settles down and he can come spend time with the family in the house at large.
He’s very hard to get pictures of, not only because he’s a black, very wiggly cat, but I’ve also found that he’s camera shy. He gets nervous if I’ve had the phone out pointing too long at him. The one of him in front of the computer screen is him sitting on my lap and we inadvertently discovered that he likes a YouTube channel called “Videos for Cats.”
-Heather, Varun, Rocannon, and Jet
Adopted 10/20/2018