Ib takes a break for some pets after catching the notorious bird feather toy.

Ib wants to try her hand…er…paw at some video games. Maybe some Super Meow-rio Brothers. 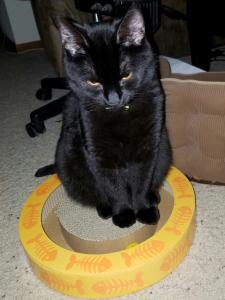 Ib deep in thought about how much she loves her new fur-ever home.

Higgins has been renamed Ib (pronounced eeb) and is getting along well at her new home. She’s such a friendly kitty and is taking it in stride when Smoke is still wary of her. We’re doing short, supervised sessions of them together, which goes ok.
Ib’s favorite place to be is on the cat tree right by the window and she absolutely loves to play with “bird on a string!” She also can be found manning the kitty pirate ship. I’ve included a few photos!
Thank you again for allowing us to adopt such a sweetheart!
Amanda